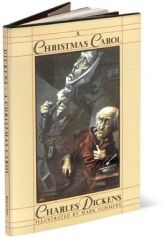 A Christmas Carol by Charles Dickens: This is a Christmas time favorite for me. I never get tired of the story of that old miser Ebenezer Scrooge and his long night of redemption. It has everything you could want in a story; ghosts, an interesting protagonist, redemption, joy, dread, family and magic. No wonder it has endured through the ages and numerous retellings and reimaginings.

Nicholas Nickleby and Oliver Twist (The Nonesuch Dickens) by Charles Dickens: A number of years ago Barnes and Noble put out some reissues of the Nonesuch Dickens editions and I picked these two up. Oliver Twist is another great story by Dickens with a cast of memorable characters. I have to admit that I have not read all of Nicholas Nickleby but what I have read I found to be pure Dickens. I will have to finish Nickleby sometime in the near future. Dickens is an extraordinary talent. If you haven;t read anything by him then I suggest you rectify that post-haste. 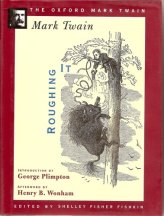 Essays and Sketches of Mark Twain by Mark Twain: This is another Barnes and Noble collection of Twain’s musings on various subjects. Twain will always entertain. I especially like the one titled Fenimore Cooper’s Literary Offenses.

Roughing It by Mark Twain: This is the Oxford Mark Twain edition and holds a great deal of writings about the American West during his time. These stories are often amusing, always interesting and contain, no doubt, a bit of truth as well.

The Chathrand Voyage Qaurtet by Robert V.S. Redick: This consists of four novels that involve the voyage and crew of the massive Chathrand ship. These are fantasy novels of the highest order. If you are a fan of high adventure, honor, duty, love, fantastic creatures, magic and the salty sea, I suggest you read this series. By the fourth book the tale has some stretching pains but never falters and delivers an ending that most would never see coming. Having spent a large amount of time with Pazel the tarboy, the taciturn Captain Rose, strong-willed Thasha, valiant Hercol and the rest, I admit to feeling a slight pang at the notion of their tale coming to an end. Can’t wait to see what Mr. Redick has in store for us next.