That’s what super girls are made of.

The news is out that Batgirl is getting a makeover via a new costume and attitude. The DC comic featuring Barbara Gordon will be losing the darkly grim and gritty for rollicking adventure and mystery during grad school. The new direction is accompanied by a new costume designed by artist Babs ( how appropriate) Tarr.

The costume is simple and functional and ready for prime time adaptability. The only downsides to the costume I see are the black stripe on the pants and the helmet. Just how is that helmet to stay on? I would include a thin strap at least or a chic facsimile would be suitable.

I never understood why a movie featuring Batgirl has not happened yet. It sounds like the new direction would be a perfect place to begin in translating Barbara’s exploits to film. My daughter and I would be front and center.

Barbara is not the only gal getting a new direction. Thanks to the new Spider-Man event Spider-Verse, Gwen Stacy is joining the super hero crowd.

I always liked Gwen as a character and felt she had been underused as just the impetus for Spider-Man’s angst and hero guilt. It is nice to see that in an alternate universe, she survived and became a super hero all her own. Just because she is in an alternate universe, I don’t expect her to stay there for long. Fans have gone bonkers over her return and I have a feeling that Gwen will be swinging into our familiar universe soon. Hey, Peter Parker is no longer married to Mary Jane so the door is wide open for a lost love to return anyway.

As with Batgirl’s new costume, Gwen’s Spider-Woman costume is fantastic. I love it even more than Babs’. Props (that’s right, I said props) to Robbi Rodriguez for knocking the design out of the park. It is at once edgy and iconic and not a complete bear for other artists to tackle. 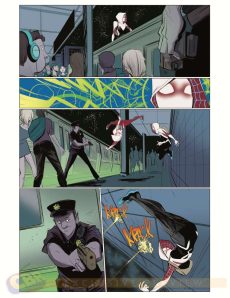 I can’t wait to get these two comics in my hands, and the hands of my daughter. She is thrilled to see a couple of super girls with awesome costumes that she could easily see herself wearing. Lets see if the character of the these two super heroes live up to the expectations. I, for one, will be following both the comics and look to be pleasantly surprised.