I’m certain that most of you have seen the new Hobbit movie directed by Peter Jackson. I alas have not. I dearly wanted to but the holiday season and money woes collided to thwart me. In anticipation of the movie I looked for a high fantasy novel that would whet my appetite for dwarves, elves, magic, battle and blood and honor (I was waiting until after I watched The Hobbit move before rereading the book again). I found The Dwarves by Markus Heitz (translated by Sally-Ann Spencer from German). 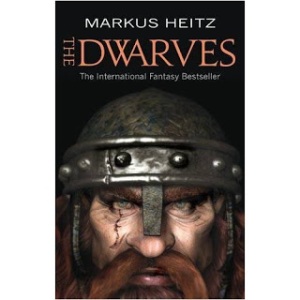 The Dwarves is the first of what looks to be a four book series that follows the blacksmith dwarf Tungdil as he journeys from being abandoned as a child and raised by a human wizard to contention of being king of the fourthling dwarves. All against a backdrop of the dreaded Perished Land encroaching on the realms of Girdlegard. The Perished Land is a land of death and decay filled with orcs, dark elves and every being slaughtered within the Land’s ever-increasing borders raised anew as a minion of the dark. All being led by the powerful mage Nudin the Knowledge Lusty, himself overcome by darkness.

Marcus has created a wonderful world and given a spotlight to a race usually reserved as the outlier to the true heroes. The Dwarves is a tale of high honor, adventure, sorrow, friendship, magic, courage and hope against all odds. The writing is very good and the pacing is excellent. I highly recommend the book and look forward to reading the further adventures of Tungdil and his friends.