There are few things that satisfy me more than a good western. Throw in some cursed six shooters, a half-mad Confederate general back from the dead and a bevy of ghoulish henchmen, and you had me at cursed six shooters. Doesn’t hurt that I just finished a weird western short story of my own not long ago (still waiting on word if that one was accepted for the anthology so yo uwill know when I do).

I am describing  a collection of a comic book called The Sixth Gun. The first six issues are collected in the trade paperback I picked up at the local convention last week. The series is written by a fine fellow named Cullen Bunn with pretty pictures by the infamous (more than famous) Brain Hurtt.

Mr. Bunn knows how to weave a fantastic yarn that will blow your socks off and occasionally slip you the willies. There are six cursed guns, you see, with most of them in the hands of wicked men (and a woman) hell-bent on reviving their former general and bringing about a mess of death and destruction to rain on the world. Each gun carries a unique power and can only be held by their current owner until their death. Good thing we have such shiftily (yeah, I made that up) upright men as Drake Sinclair and friend Billjohn O’Henry to avert the oncoming apocalypse.   Ms. Montcrief is just an innocent thrown into the mess by accident, or fate. The story moves along at a cracking pace with smooth dialog and precise prose.

The art by Mr. Hurtt is a beauty and that is no small feat when your tasked with illustrating a lived-in Old West, zombie clay warriors, horses, a river of chains and one mighty ticked off thunderbird. I can’t think of an artist more fit for this story.

If you are a fan of westerns and the weird, check this one out. 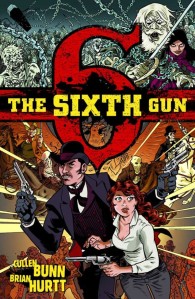